Together with Samsung, we have launched a Digital Signage demo area at Samsung’s European Head Quarters in Chertsey, UK where digital signage content from embedsignage.com is being delivered directly to Samsung SSP SOC D Series displays. 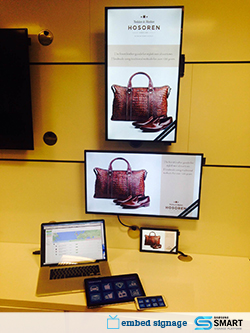 This digital signage demo area is to showcase Samsung’s increasingly powerful Smart Signage Platform, which is directly integrated, via a System on Chip (SOC), to their D series commercial grade displays. The SSP displays are displaying content that is delivered using cloud based digital signage platform; embedsignage.com. The displays download the content via built in WiFi and store it locally for continued playback, even with network interruptions.

On show at the demo area is a pre-released 10.1″ all in one display, perfect for shelf edge retail signage, a 55″ landscape all in one display and two 32″ all in one displays (one in portrait and one in landscape). All of the Samsung SOC D series screens can have their content changed using the Samsung Android Tablet that is loaded with an interactive touch layout with various industry sector designs. Every piece of content and interaction between the Tablet and displays is done through the feature rich, cloud based digital signage software; embedsignage.com. This video shows a very brief demonstration of the demo suite:

If you would like to a demonstration of how using embedsignage.com and the Samsung SSP SOC D Series displays can deliver a suitable digital signage solution, please contact us. You can also sign up for a free 28 day trial of embedsignage.com and begin to explore how to deliver multi zone digital signage content to a range of devices including Android, iOS, Mac OS, Windows, ONELAN and of course the Samsung SSP SOC D Series displays. 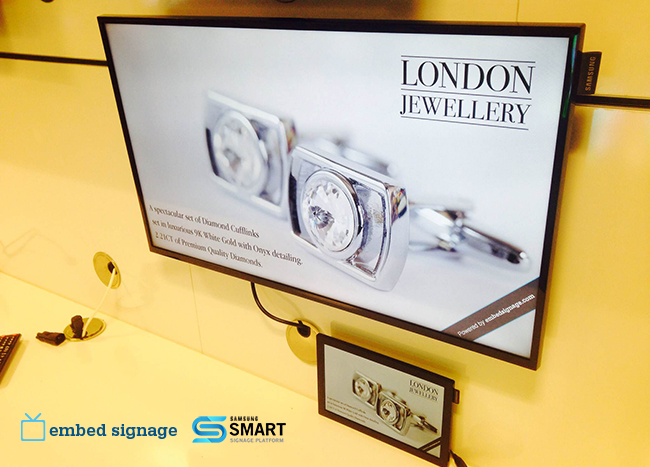